Some time ago, I fell in love with California.

It was literally within 5 minutes of driving away from LAX Airport in a rental car.

It was January, the sun was shining, the palm trees glistening, and I proclaimed with fierce determination:

In the shuttle from the airport to the rental car place someone had asked me “Are you from Canada?”

Then I realized I was wearing a parka.

My trips to and from L.A. began with a certain Raine Maida, singer for the band Our Lady Peace… somewhere amidst years of making solo demo recordings, he heard something he liked and asked me if I could get myself to L.A. to record. I lied and said yes.

It turned out to be the greatest lie I could have ever told. You see, the best thing about working with Raine Maida, was being introduced to Randy Cooke.

Randy was a sought-after session drummer who Raine liked to use when he was producing… you can find him on Kelly Clarkson, Hilary Duff, Ashley Tisdale, Natasha Beddingfield, Five for Fighting and Chantal Kreviazuk albums (to name a few) as well as onstage with the likes of Ringo Starr, Dave Stewart (The Eurythmics), Leonard Cohen and Raine’s solo project. 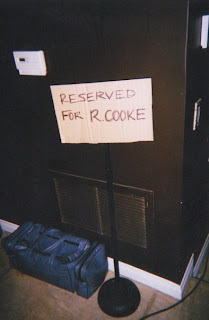 Before Randy arrived at the studio for a day of tracking for my upcoming release, Raine made him a “Reserved For R. Cooke” sign to place in his parking spot. Randy had just done a bout of television shows like Larry King Live, Late Night with Craig Gilmore etc with Ringo Starr, and I guess this was Raine’s way of ensuring his ego hadn’t gotten too big. Having known the guy for about 2 years now, I can say with confidence that this could never happen. He is the sweetest, most down to earth man you will EVER meet.

Awhile ago I stopped coming to L.A. just to record. In fact, after I fell madly in love with Randy Cooke and he became my favourite person on the planet, I could care less about recording! I just wanted to spend time with him and finally, as of a couple days ago, I’m back in his arms surrounding by sunshine, the ocean, and glistening palms. 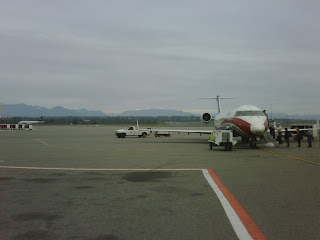 Flight consisted of World’s Smallest Plane and a layover in Utah. This is going to sound terrible but, although I haven’t been gone for long, I had forgotten how overweight Americans are becoming… The percentage of morbidly obese travelers in this one airport was MIND SHATTERING. Maybe the people with the money to travel in today’s economy are consuming more than their fair share in multiple categories…

My guilty pleasure when traveling is to pick up one of those terrible entertainment magazines, you know, the copies that are only worth about $2 and as soon as you carry out the embarrassing sin or purchasing one you instantly regret it? Within seconds I found myself on a page which highlighted to cost of several celebrity’s wardrobe’s. $1200 for a purse. $950 shoes. $2500 dress. The list went on and on.

$1200 for a frickin purse in a gad-damn recession on a planet where half the population is hungry or living far below any decent standard???

Sudden I began to feel very guilty. Why was I holding this magazine? Why do I do this? All over the place we’re a nation of guilty, guilty people justifying our good and bad deeds. And here I was, obese with frivolity.

One more plane. So excited. It’s been far too long since I got to spend time with my favourite person on the planet and when you live lives of traveling, distance, web cams and long distance phone calls, you truly savour every tiny moment together.

After a couple hours of disbelief and ecstatic happiness, we ended up at one of my favourite restaurants in L.A.: Pure Luck.
Pure Luck is an all vegan restaurant which somehow makes a curious invention of Mother Nautre’s called “jackfruit” taste like bar-b-q pulled pork. Maybe you’re the kind of vegan who thinks that’s ridiculous, hell, maybe you’re a carnivore who thinks the same…either way, I’ve been vegan for about 13 years and LOVE to discover new and exciting ways to make fruit, vegetable, soy products, nuts…WHATEVER, taste like carnivorous bi-products! Haha. I ordered the fiesta plate and Randy had the beet salad and jackfruit carnita wrap (all vegan). 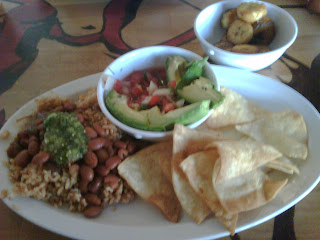 The other great thing about Pure Luck is the fantastic beer menu. They have all sorts of great micro-brew and mini-brewery/indie type beers that you won’t find in most places. I had a heavenly Hefe and Rnady had a “Blue Dot” made by Hair of the Dog (the one and only beer I like more thank Granville Island Winter Ale. True Story.) Oh, and it’s across the street from Scoops, a great vegan ice cream joint 😉

So here I am, back in paradise, with the man of my dreams… and I couldn’t be happier.

Little Known Fact About Me Day Two: The two major injuries of my whole life resulted from a bass in the head at Call the Office in London (5 stitches) and a teeter-toter at my elementary school in grade 2 (6 stitches). What can we determine about me from this fact?? 😉 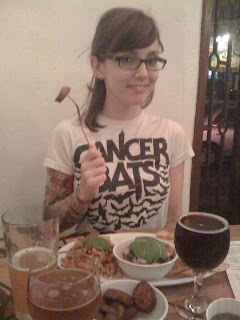