Today was a fun day. The funnest day in a while.

Tamar’s in town. I met Tamar for the first time while shooting the (upcoming, soon to be released) music video for These City Lights. Tamar is down here for a cool make-up conference and after spending the weekend learning about prosthetics, latex and all kinds of crazy special effects makeups things, we spent the day in Santa Monica and Venice.

For all the times I have walked around the Santa Monica pier today was the first day I went on the roller coaster. It wasn’t all that good but, ya gotta do it once in your life yknow? My photographer buddy Aaron Schwartz (who was also at the These City Lights shoot) is supposed to come down next month to coaster hop with me for a few days so I wasn’t too worried about it. I did, however, have a fantastic time on the Scrambler. Every time the ride went around, a “Weeee!” escaped from my lungs, like the sound you make when you’re five and on a swing. After awhie we weren’t sure if we were laughing from the ride of the “weeeee!” Either way, there was giggling the whole ride through.

Then we walked to Venice (which I had no idea was that close to Santa Monica). It was a beautiful day and a ton of interesting people watching went down. Oh! I almost forget the most important part…before these adventures we lunched at Real Food Daily and split Salisbury Seitan (with vegan gravy and mashed potatoes oh boy) and a Mexican Enchilada type dish followed by (vegan, of course) coconut cream pie and peanut butter chocolate pie. And then a cookie. To go.

Random Fact: I have not done anything productive for about a week now. 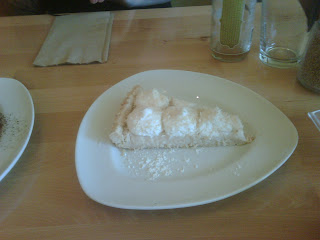 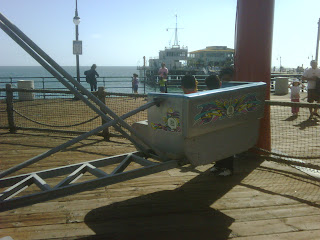